Gouldians hold a special position amongst the finch family of birds as they are capable of accelerating the moult (compressed moult) or slowing the moult (delayed moult) in response to adverse environmental conditions.
In wild Gouldians, a compressed wing moult occurs under ideal climatic conditions when food supplies are plentiful allowing multiple flight feathers to grow simultaneously. A delayed moult occurs when food supply is poor.

In captive birds, a compressed wing moult is a sign of good health and a well balanced diet.

A delayed moult is often not recognised until baldness appears towards the end of the moult.

Possible Causes of Baldness – Associated with a Delayed Moult

A delayed moult usually ends up with baldness when poor nutrition and sudden climatic changes lower immunity and trigger an airsac mite infection.
Without looking at the stage of the wing moult it is difficult to recognise a delayed moult until the end of the moult period.
When baldness appears towards the end of the moult cycle, underlying causes are narrowed to inadequate diet or an underlying Airsac mite infection.

Baldness that appears outside the normal moult period may indicate other conditions such as fungal, yeast or bacterial infections.

The immediate treatment of baldness should focus on correcting a deficient diet and administering S76/moxidectin to treat airsac mite infection.

S76 treatment for 2 days each week for 3 weeks. Follow up treatments are required as part of airsac mite prevention.

In the past, Iodine has been used to treat balding in Gouldians because liquid Iodine stimulates the thyroid gland and induces a moult.
Iodine is a very necessary part of the treatment of baldness but when used alone, does not provide the correct nutritional balance to support a rapid moult.
It should be incorporated with a complete nutritional programme that provides both energy and nutrients to moulting birds. 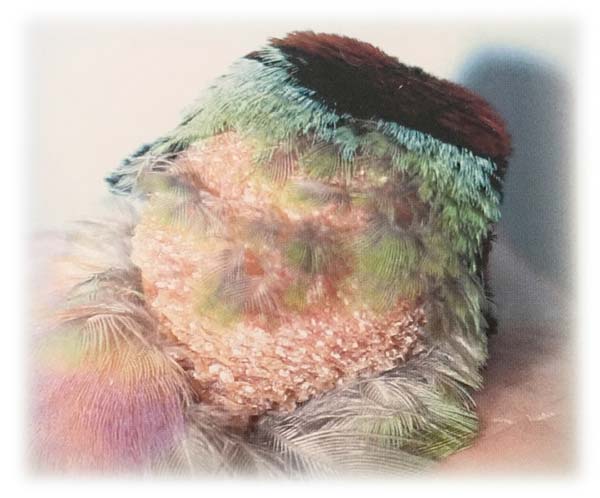