Flourish is a blend of natural herbal ingredients that help to support the bird’s immune system, attack disease causing organisms and create a good environment in the gut for beneficial bacteria.

Flourish is a blend of natural herbal ingredients that help to support the bird’s immune system, attack disease causing organisms and create a good environment in the gut for beneficial bacteria.

The immune system is nature’s natural defence against infection and allergies. It is very successful at identifying invaders into the body, typically viruses, bacteria, fungi, yeasts, coccidia and allergens but other undesirable invaders as well, and having identified their presence, it marshals the body’s resources to attack them. White blood cells play an important role in this, effectively ‘gobbling up’ the invaders to render them inactive and in the process reducing the number of germs in the body.

Interestingly and importantly, the immune system has no need to diagnose in the same way as a doctor or veterinarian might. This means it does not have to carry out tests while the patient waits for the results and becomes more ill. It simply recognises there is an invader and deals with it. This is in contrast to a veterinarian who in the case of bacteria needs to know what the particular bacteria is, and possibly the strain as well, in order to prescribe the appropriate antibiotic. It is also means the immune system is very effective at dealing with viruses, whereas viruses cannot be readily dealt with by doctors and veterinarians unless there is a licensed vaccination available.

The immune system can become somewhat worn down and tired if it is overworked or effectively undernourished. It thrives on the availability of certain nutrients and works best when it is challenged on a fairly routine basis. So keep your bird’s immune system ready to pounce.

Flourish can be bought separately, but is also included as one of the ingredients in our Feast eggfoods.

Key Features: Flourish can be used to support the bird’s natural defences during good times and during times of illness. For any species of bird prone to coccidial infection (frequently known as ‘going light’), Flourish is very important to you.

There are no reviews yet. 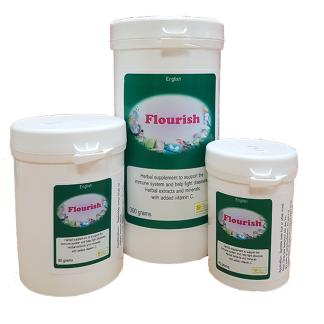