The Importance of a Completed Moult for Successful Breeding Outcomes

This article describes the relationship between a naturally completed moult and successful breeding season, and also looks at the different signs and remedies of an abnormal moult.

The Relationship between the Moult and A Successful Breeding Season

For the Gouldian Finch there is a special relationship between their moult and the breeding behavior as the moult primes them into breeding condition.
In nature, their moult begins at the end of the  dry season (between September-October) and concludes by mid to late December. when summer rain initiate breeding behavior.
In order to enjoy good breeding outcomes – especially with the weaer mutation varieties of the Gouldian – breeders should not allow their birds to breed between September and December.
During these months the Gouldian Finch should be allowed to complete the moult in the shortest possible time. The goal is achieved by ensuring the flock is strong art the onset of the moult and receive adequate nutritional support throughout the duration of the natural moult, which takes about three months to complete. When the moult period is shortened for any reason, sign of a abnormal moult – especially visible on the head of a Gouldian – appear and successful breeding outcomes become less likely.
the completion of the moult  is extremely important part of a successful breeding season an every effort should be made to support is natural completion. This is achieved by keeping the birds healthy during the moult period and ceasing all breeding activity by August 1st.

Gouldian Finches must be strong and healthy during the moult period

On going Air Sac Mite treatment and nutritional support during the moult will ensure the moult progress normally and is complete by the beginning of the breeding season.

All breeding activity must be completed by August 1st
Breeding results will be better when Gouldian Finches complete their moult naturally and without any interruption. This is achieve by ensuring breeding activity stops by August 1st in warm regions, and much earlier when winter temperature falls below 10 degrees Celsius, so that breeding pairs are given enough time to recover from their breeding activities before they start to moult around 1st September.

A Compressed moult occurs when Gouldian finches are not given the opportunity to start their moult in September (there may be regional variations as to when the moult starts) because breeding extends too close to the start of the natural moult season. A compressed moult may also appear when exceptionally cold weather occurs throughout August and into September. Gouldian Finches need additional dietary energy, protein and minerals to overcome the damaging effects of a compressed moult.

Signs of an Abnormal Moult 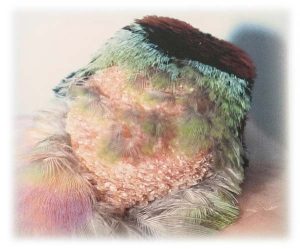 Head baldness in the presence of multiple adjacent new growing flight feathers, indicates a compressed moult and that breeding or cold weather has extended too close to the moult period. Ultimately the cause of baldness is a depletion of nutrients reserves brought on by a compressed moult. Air sac mite infestation is

Missing facial and head feathers is the most serious form of an abnormal moult. This health problem is often associated with nutritional deficiency that has prevented the regrowth of these feathers. Inherently weak mutation Gouldians are most likely to show this symptom as they are most susceptible to stress related infections and inadequate diets. a likely complication of birds with baldness as they are under stress. Breeding activity is unlikely with bald headed gouldians as they do not come into breeding condition.
At first the back part of the head is bald but when untreated the head becomes completely bald.

The appearance of multiple pin feathers crowding a Gouldian`s head is an indication of a sudden halt to the moult as a result of an energy or protein deficiency. 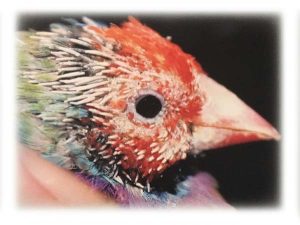 Examination of the wing feathers usually reveals a normal moult pattern as this condition is not usually the result of a compressed moult.

the presence of head pin feathers is a sign that the nutritional requirements of the moult are lacking or that an intestinal disease has prevented the full absorption of food nutrients into the body system. Head pin feathers are a sign that the flock is receiving marginal and inadequate source of nutrition as the nutritional requirements of the moult peak by the time the head feathers are being replaced. This is the time of the moult when the largest feather of the gouldian – the outermost primary flight feathers, are also being replaced. Pin feathers appear because the long flight feathers, which are essential for survival in Nature, take precedence over the head feathers for all available energy and protein.

On examination of thew wing feathers the progress of the moult is often retarded but no evidence of a compressed moult. However, weathered flights from the previous years moult are often visible and an indication of long term malnutrition.

Irrespective of the underlying cause of an abnormal moult, the immediate treatment aims to restore the nutritional balance and control stress related air sac mite infestations.

For head pin feathers and missing facial feathers additional treatment is required as these conditions are often associated with a primary diseases or secondary stress related infections.

The appearance of any birds with symptoms of an abnormal moult during the moult season indicated a nutritional deficiency is present.
The deficiency may be directly related to a inadequate diet, or indirectly caused by a disease that affects the absorption of the nutrients from the bowel or a diseases that weakens the bird.

it is important to look at the wing feathers when investigating an abnormal moult in order to identify signs of a compressed moult which indicate the moult period has been reduced.

Abnormal moult problems can be avoided and breeding outcomes improved by following a Moult program and ensuring the birds are healthy, strong as they enter the moult period.